The title of this post is a very elegant summation provided by Siddhartha Mukherjee of a talk that he gave at Harvard Medical School (HMS) last week. I was lucky enough to be at HMS (in the overflow room, sadly) to listen to Mukherjee's talk. You may remember that I recently read and reviewed his Pulitzer Prize winning book, The Emperor of All Maladies: A Biography of Cancer. I leapt at the chance to see him talk about his work because I loved the book so much, I gave it a full recommendation for everyone with no caveats, which doesn't happen often. 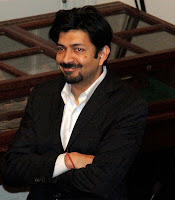 Mukherjee was the speaker for the 37th annual Joseph Garland lecture, honoring the former editor of the New England Journal of Medicine 1948-1968 and former president of the Boston Medical Library. Mukherjee is an Assistant Professor of Medicine at Columbia University, but he earned his MD from HMS and thus spent many hours in the Countway Library, which is the merged effort of HMS and the former Boston Medical Library. Mukherjee is every bit as eloquent when speaking as when writing, and I enjoyed hearing him articulate the thought process that went into his book.

The talk was called "Four Revolutions and a Funereal" and walked briefly through the history of cancer research (as much as one can in an hour) to arrive at present day. The four revolutions represented the greatest breakthroughs in the understanding of what cancer is: 1. Cancer is a disease of cells, 2. Cancer is a disease of genes, 3. Cancer is a disease of genomes, and 4. Cancer is an organismal disease. The fourth I found particularly interesting, and it is worth repeating Mukherjee's explanation of how he defines organismal, "of or pertaining to an organism as a whole including its physiology, environment and interactions." From everything I've learned in the last three months writing on a cancer biology beat, I feel like that statement certainly hits the nail on the head.

From the 1800's when cancer was thought to be a disease caused by black bile and an imbalance of cardinal fluids, which Mukherjee jokingly called the "hydrolic theory of pathology," our understanding of cancer has come a long way. But it seems like with every bit of progress made the field almost becomes murkier. The more we tease the problem apart, the more complicated we realize it is. From cell division, to genes that drive the process, to the proteins that control gene expression, it seems as though the smaller you go into the cell processes the more numerous the possibilities about what could go wrong get. Mukherjee closed his talk by saying that cancer is a disease of pathways, and that figuring out how to alter aberrant communication and information processing as it goes on within a cell is the future of cancer research.

Throughout the talk I was struck by the way Mukherjee managed to engage with a audience, perhaps a third of which was sitting with me in a room across the quad from where he was presenting. I was so captivated by his talk, which I thought was pretty impressive for watching a live stream. Just like in his book, he interspersed his talk with annecdotes that brought to life his personal quest for understanding which is what I think from listening to him really drove him to write the book in the first place.

An example of this is how he dedicated his book to Robert Sandler (1945-1948) a little boy who achieved a temporary remission from leukemia under Sidney Farber's care at Boston Children's Hospital. Though Sandler ultimately died of the disease his place in history was solidified by that landmark medical study. When Mukherjee was trying to track the identities of Farber's early patients all he could come up with were the initials R.S. He never was able to find the identity through available records in the United States. He discovered who R.S. was while visiting his parents in India, the information was in the hands of a neighbor of theirs who was a historian and had a roster of Farber's first chemotherapy patients. Mukherjee dedicated the book to the little boy, and after the book was published, he got a phone call from Robert Sandler's twin brother who had seen the book in a store, opened to the dedication page and noticed his brother's name.

This story hits at the heart of what Mukherjee meant when he said that "medical history is biography." This holds true for science history in general. Discoveries made, research conducted, experiments performed, trials carried out - the personal narrative underscores everything. We always say that being able to craft a compelling narrative is critical to effective science communication, and this is why. People want to hear stories about other people, and science including medicine is inherently a story about people. As a speaker Mukherjee was able to do exactly what I admired so much in his book; he explained the science and told us where it was going, but he did so in a way pulled at our emotions, perceptions, and our ability to relate to other people. He made it human, driving home the idea that good writing doesn't just serve to explain. Context is everything, and as writers our challenge is to make sense of science, to connect people with science through a context that they can understand.

If you haven't read Emperor of All Maladies yet, you might want to get on that...
Posted by Unknown at 2:44 PM