Wake Up Sweetheart, You're A Feminist (Book Review: The Good Girls Revolt)

I hope you read that title with the sarcasm with which it was meant, and that you never try to call me sweetheart. It won't go well. It's been a while since I did a book review here at Science Decoded (mostly because I don't have the time to read that I used to) but I just finished Lynn Povich's The Good Girls Revolt and it spurred me to want to write this post which has been kicking around in my brain for months now. The Good Girls Revolt is the story of the first all female class action lawsuit filed by the women who worked for Newsweek.

Even just two years ago, if you had asked me if I was a feminist I would have told you no. Back then the idea that women needed to form a movement to be treated equal seemed extreme. Equality isn't hard, it's a pretty simple concept really. So who wants to be all extreme and label themselves and fight for...what...what are we fighting for? I didn't know. I had plenty of opportunities, I interacted with professional women a lot. It didn't feel necessary. Besides, I like shaving my legs (though you should read this post about choosing not to). I have a closet full of dresses and high heels. You're unlikely to catch me outside the house without makeup. I was vice president of my sorority for crying out loud. Feminist? Psh. But you know what feminism isn't about? Those things. Any of it. 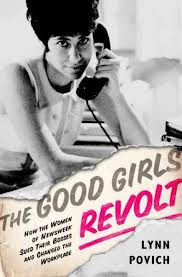 Coming from a relatively well-off, educated background where I was always expected to go to college and then work, I never thought of myself as a feminist. My Dad's attitude toward my career as a science writer has always simply been, go get 'em. I have surrounded myself in life by people, men and women, who value my intelligence and drive to succeed. Growing up I never felt like I was being compared to my brother or any other guy. I never felt like I was less or that less was expected of me. Feminists were an other, and if anything made me feel intimidated. The judgement of other women is scary, sometimes it feels scarier than the idea of walking into a room full of men to tell them what's what. But, spending a little time in the world, talking to people, and reading things like Povich's book or Dr. Isis' Feminist Awakening has a wonderfully eye opening effect.

I think most women in the workplace have a so-and-so said this absolutely jack ass comment to me about xyz story, at least I do, and I've heard many stories in a similar vein. The types of things that make people look at you like you've got six heads because surely someone didn't actually SAY that. You might not even have realized it, because at the time I didn't really see it as sexism. I knew I was upset that good ideas were being shot down. The thought that anyone would take the way I look and my gender and use that to gauge my ability as a writer before actually reading anything I wrote was so completely absurd to me, that I didn't even realize at first that it was happening.

In hindsight, this made me blame myself - maybe it really isn't that good an idea, maybe I'm not working hard enough, maybe if I'm here later and put in more hours, maybe if I prove myself...no. I want to grab unpaid intern Erin and shake her and say don't you dare write that crappy story that you know is bullshit while the paid male intern gets the better story. Walk out. Leave. You're better than that. I've heard it said before that my generation is lazy and entitled. Well in my not so humble opinion, myself and my friends and other young people like us more often assume deeply personal responsibility for failure. If I don't get that story it's because I did something wrong. Me. I'm not good enough. How could it ever be that there is a system ingrained in society that is going to hold us back? This is 2013. It can't possibly be true that we're still dealing with this.

Povich's book chronicles events from the 60's and 70's, we can't still be having this same problem? No, no we're not. The problem back then was flagrant, out in the open, so egregious that it couldn't be ignored. That is still happening, oh, does it happen. But there is also a subtle sexism - a mild slight, a passing comment, a raise that's just a little less, a promotion that takes a little longer to get. These are the things that are harder to pinpoint, harder to blame on sexism, but are ultimately what made me wake up to the fact that I'm a feminist. Part of Povich's book focuses on today, on three women from my generation working for Newsweek: Jessica Bennet, Jesse Ellison and Sarah Ball and the story they wrote in 2010 "Are We There Yet?" questioning if the battle of the sexes is really over. Their experiences resonated with me a lot.

Since I entered college and started writing and trying to get my work published, I've been lucky in that the sexism I've faced has been mild. Sad state of affairs that it makes me feel lucky, but it does. Right now where I work my superiors are all women - my boss, her boss, her boss' boss, her boss' boss' boss...but my awesome situation isn't common (and believe me, I don't take it for granted.) But that doesn't mean that sexism isn't still here, and that other people aren't dealing with much worse on a regular basis. I'm a feminist for myself because yes, I want a fair shake, I want to be recognized for the value of my work and not whether or not my hair looks shiny that day. But, adding my voice to the other feminist voices out there is about more than just me. I've got it pretty good. I'm not trying to argue that I don't. But I can support the women out there who are dealing with overt sexism, who are being attacked. I can try to be an ally. That to me is the real value of feminism, of standing together.

It's my opinion that a lot of the yelling that happens on the internet (if you could only hear how loudly I am typing!!) happens because we've gotten so wrapped up in judging the world based on our personal perspective that we can't see the things that happen outside ourselves. I've never encountered sexism therefore sexism doesn't exist. We have GOT to shake off this way of invalidating the experiences of others. Once you start listening, I think you'll find like I did that the need for feminism is impossible to ignore. Participating in #sci4hels, and working with Rose, Lena, and Kathleen (follow us in Helsinki next week!) is another thing that has driven home for me the need for women to support each other. We've already used our platform to have a conversation about being female science writers, and I hope that discussion is one that will continue in the future.

Feminism, for me, is a way to recognize that we've come a long way but we still have a long way to go. We still need to get out there, and support each other, and continue having these conversations because equality might be a simple concept, but that doesn't make it any less evasive. I've had these conversations a lot lately, and have been asked, "do you think people don't take you seriously because...you know...you're good looking?" Typically, I answer something along the lines of making smart decisions is optional, and if anyone doesn't take me seriously for any reason that's their mistake to make. I don't think it's a bad answer, but until that answer is a resounding "no" we're just not done yet.