Today my group in J669 gave our midterm presentation on Ted Conover's Rolling Nowhere. The book is Conover's first, which was published in 1984. The premise is that as a young anthropology student, Conover spent four months riding around the county in empty boxcars with the homeless. He did it as an experiment for his thesis, but after he returned from the trip and finished his degree, he decided to turn his personal narrative of the experience into a book. 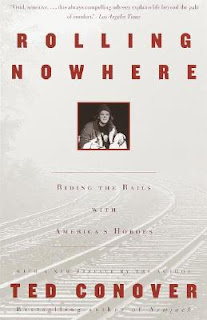 I am pretty happy with the way our presentation went. I have an unfortunate cold, so I was a little worried I would lose my voice or have to keep blowing my nose and be obnoxious while the members of my group were presenting, but Robitussin (arguably one of the worst tasting substances known to man) kept my symptoms in check long enough to get through our 1 1/2 hour discussion.

My contribution to our analysis was to compare and contrast Conover with the other authors that we've read as part of our class work for J669. I also contributed a little to the questions and discussion that we had after we all presented the parts we prepared individually. We talked a lot about the ethics involved in immersion reporting, and whether or not it would even be possible to give an accurate portrayal of homeless life given that Conover was an upper middle class college kid.

Overall I think it was a success, the class definitely helped us out by participating in the discussion and bringing up issues of their own to talk about. After I asked the first question, they really ran with it (prompted by Deb) and we didn't have to add much more to keep the class talking for another 15 minutes. Its always good when you can fill the entire time you are allotted and we did that, so I'm optimistic.  I also got another paper back in J620 today and it was another A so I'm two for two in that class, which is also good.

I'm definitely headed into the home stretch of this semester. The only assignments I have left are my finals, and one more book for J669 (Sebastian Junger's War). It has gone incredibly fast!
Posted by Unknown at 1:53 PM