Book Review: The Power Of Habit

I have a smart phone habit. My cue is the little green light that indicates I have a new message. My ritual is checking the phone to see what that message is and who sent it. The reward I get from doing this is the rush of immediately connecting through a text message, email, Facebook mention, or Twitter notification with people that I like or want to talk to. I had no idea this smart phone cycle had become habitual to me, until I read about it in Charles Duhigg's The Power of Habit. His description of the smart phone cycle I just explained seems to fit me exactly, particularly because I don't have to think about what to do when I see that little green light, I just check the phone without really thinking about it. 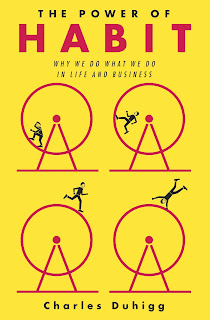 It would be accurate to say that The Power of Habit blew my mind. I walked away with that feeling of shock and awe you end up with when you finally understand something that seems so glaring and obvious now that it has been explained to you, and it has actually made sense. It is the feeling I got in seventh grade when the pythagorean theorem finally clicked in my brain after months of trying to understand it (well, maybe that was a little more exciting because my very relieved math teacher called for Jolly Ranchers all around to celebrate my breakthrough). Still, The Power of Habit blew my mind because now that I know what I'm looking for it is easy to identify the dozens of things I do out of habit, that I never really considered habitual.

Duhigg expertly explains that each habit occurs as a loop in our brain. There is a cue that triggers the habit, the routine (whatever action you do to perform the habit), and lastly the reward our brain feels from performing this routine. This habit loop takes place for different activities, at different times of day, and for different types of habits. Some habits we can easily identify because they are notorious for their negative effects like over eating, smoking, drinking to excess, etc. But there are many habits that are not detrimental, and in fact help us to get through our day without overloading our brain with decisions.

For example, every morning I perform the same habit immediately after waking up. My alarm goes off (cue), I go to the kitchen and press the button on the coffee pot (routine), and I end up sitting at my computer with a warm mug while caffeine percolates through me and I wake up (reward). This type of habit can sometimes be thought of as the things we do on "autopilot" like driving to work by the same route, or checking your email at the same times every day. I had never thought of my everyday actions as habits, but once I was clued into the cue, routine, reward loop I was able to identify dozens of instances within my own behavior. It is quite obvious really, but I had just never looked at my life that way before. Consider my mind blown.

There is a tremendous amount of information in The Power of Habit, and Duhigg navigates it all with precision. I think reading this book could have value for anyone interested in their own behavior. It definitely held some insights for me as to why I do what I do. A good example of the type of stories told in The Power of Habit is this excerpt which ran in the New York Times magazine "How Companies Learn Your Secrets," about how customer behavior clues companies into things you would never actually tell them. In general, I would recommend this book because the examples and explanations are really interesting and the structure of the narrative drives the book forward in a way that never seems to drag on. It is an easy and informative read.

That being said I do want to take a moment to talk about the structure of the book from a writer's point of view. I was personally impressed with the way this book is structured, with the different studies and stories cobbled together to create one strong explanation of what habits are, how they work, and what they do. The book is broken into three parts: The Habits of Individuals, The Habits of Successful Organizations, and The Habits of Societies. These parts contain three, four, and two chapters respectively. The chapters all tell multiple stories, which in my opinion serve both to provide context and examples for the scientific studies Duhigg discusses, while hooking the reader and forcing them forward through the text.

For example, chapter three opens with Tony Dungy a professional football coach (who won a Super Bowl with the Indianapolis Colts), and from Dungy goes onto Bill Wilson the found of Alcoholics Anonymous, then scientific studies of alcoholism, onto a girl who bites her nails, followed by an explanation of habit reversal therapy, back to Tony Dungy, then back to alcoholism, and finally wraps up with the conclusion of Dungy's story. The chapter jumps around, and sometimes feels like you're being teased with just bits and pieces. Still, none of this was ever confusing for me, I was always aware of where I was within the text.

All the different elements of chapter three are wrapped around the theme of how people actually succeed at changing their habits. The structuring of this chapter is smart. I wanted to know what happened to Dungy, that was the narrative I wanted to see play out. I was personally interested in Dungy, but the other content in the chapter - the discussions of alcoholism and nail biting along with the scientific research - framed the Dungy story so that it wasn't just a story about a unique football coach, it was a story about what it really takes to achieve a change in behavior drastic enough to override our established habits. It all works together, beautifully.

With a well thought out and careful structure, perfectly chosen examples, and easy to understand scientific evidence The Power of Habit is an interesting, accessible and solidly researched piece of writing. It is entertaining for anyone looking to read for fun, and a great case study for writers looking to learn more about how to structure their own work.
***
Note: I was contacted by the author regarding the release of this book, and I accepted a copy compliments of Random House. Never did anyone try to influence what I would say if I decided to write a post about The Power of Habit. All thoughts and opinions are my own.
Posted by Unknown at 11:24 AM