Note: This post was written before I learned that what has long been claimed/believed to be a pure work of non-fiction, has been called into question by long-lost files from the Kansas Bureau of Investigation. Here is the Wall Street Journal's reporting on the revelations contained in those files.
- EP 2/13/13
***
Well, I'm 46 years late to the party on this one, but I finally read Truman Capote's In Cold Blood. The first class I took here at UW was a literary journalism class with Deb Blum, in which we read and learned about some of the greatest narrative journalists. I have a long list of books mentioned or recommended in that class that I have yet to read, and when I find free time in my schedule I've been working my way through it. I decided last week to tackle Capote's true narrative of a quadruple homicide, and I'm glad I finally did. 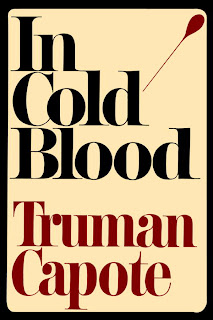 In Cold Blood made me do some serious thinking about the amount of murder and mayhem my brain digests on a daily basis. My favorite television show is Criminal Minds and I watch it all the time on DVD or in reruns. I also read a ton of paperback murder mysteries as a way of relaxing my brain. I just read the Hunger Games, and the premise of that book (which is young adult fiction) is 24 teenagers fighting to the death for national television. Murder is a fairly common theme when I'm choosing entertainment, and honestly reading In Cold Blood made me feel sort of sick about it all.

I ended up feeling like In Cold Blood was too good, too entertaining. It was entertaining in a way that blurred the lines for me between real and not real, and I had to keep reminding myself that the events recorded by Capote really happened. Four people were murdered, and two more people were put to death to pay for those crimes. Six lives extinguished, and I read this for fun. It was unsettling. Even though it all happened so long ago, the murders happened in 1959 and the murderers were put to death in 1965, I feel like the book drove home the fact that there is a huge disconnect between murder for entertainment and murder as fact.

As far as being a journalistic piece goes, I was blown away by Capote's attention to detail. Particularly in the first section of the book, before the murders occur I felt like Herb Clutter and his daughter Nancy were described so vividly. The account of how they died would not have had the same impact if Capote had not spent the time setting up how they lived. It is what gives the book all of its heartbreak. The storytelling is masterful and I feel like you can see a tremendous level of skill in the way the story is structured, to set you up, pull you in, and keep you reading until the last page. I had to remind myself while reading that Capote never met any of the Clutters. They were all dead by the time he got to the story, yet they are so alive in his words.

Capote actually did interview the murderers, Dick Hickock and Perry Smith. In the sections of the book dealing with their arrest, trail, and subsequent stay on death row I again had to remind myself that these were real people. Perry Smith really did kill four people for all of $40-50 while Dick Hickock stood by and cleaned up the evidence. I really can't imagine Capote sitting with the men he describes talking about their lives and getting them to open up about all the things they end up telling him. To get to this level of detail it feels like Capote has to have become a character in the stories of Hickock and Smith, yet he is only mentioned once or twice and always as "the journalist."

Pieces of writing are considered classic for a reason, and I'm glad I finally read Capote's classic story of mystery and murder. You have to read journalism, good journalism, and lots of it to appreciate what a narrative journalist really does. It is a great book, but it certainly isn't for the faint of heart. Not because it is graphic (certainly not by today's standards) but because the knowledge that every word is true will send your emotions rattling around.
Posted by Unknown at 1:35 PM