I have a long list of "to read" books that I had hoped to get through this summer. I've read far fewer of them than I had hoped, but Mary Roach's books were on my list and I recently read her first one, Stiff: The Curious Lives of Human Cadavers. She says that she got a lot of weird looks while she was working on the book when she told people she was researching cadavers. Since I read on the train, I received a few similarly questioning looks when people would glimpse the cover with its picture of toe-tagged cadaver feet. 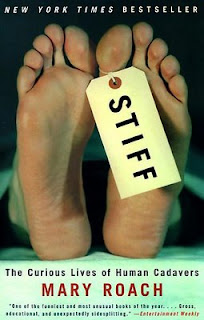 The book is absolutely fascinating, and I probably shared far too many of the facts and interesting bits that I learned with my friends and family. Nothing says light beer drinking conversation like discussing how when someone is in a plane crash, they usually die from the organ damage. This is because the organs are moving faster than the body so when the body smacks into the surface of water and stops, the organs keep going and get damaged when they hit the inside wall of the body. I know my friends really appreciated that tidbit, and by appreciate I mean I was met with "can we stop talking about dead bodies now?" I know that I have good taste in books when my friends automatically cringe when I start a sentence with "So I was reading a book about..."
But anyway, for a book about cadavers Stiff is charmingly funny. It is written as if the reader is right there alongside the author as she does things like visit a face dissection, explore a body farm, test different ways to get rid of remains, and travel to China in search of a crematorium involved in a human dumpling scandal. Yes, human dumplings. Roach certainly found the most juicy tidbits in the business of dead bodies, but they make for an incredibly interesting book. What happens to cadavers is one of those things that no one wants to talk about, so almost everything in the book came as a new piece of information for me. I appreciated her candid, straightforward approach and the way it mixed with her own commentary and tangents.
Roach is completely comfortable with her own feelings of how awkward and strange some of the things that happen to dead bodies are, and the fact that she is an out of place witness to them. Her inner dialogue about these things is entertaining and approachable and that is what makes being told a story about dead bodies so palatable.
One of the best things about Roach's book is that there is a sense of balance between awkward/funny and total reverence for the dead and what science (and really all of society) have to gain from bodies donated to research. The dead are treated with respect, and I find that to be an equally important part of the book. It does make a plug for donating your body to science, which might bother some, but I didn't find it inappropriate. Roach makes it clear what she would want done with her own remains, and also makes a very good case for why people should donate their bodies to science (in spite of some of the experiments that seem undignified). I think suggesting that body donation might be a good way to go is coming from a good place.

Overall, if you can stomach television shows like Bones or CSI, you can stomach Stiff. The subject matter is gross, but the writing is divine and definitely worth your time. I can almost promise that you will learn some things you never knew about, and really might want to know considering we all eventually end up as cadavers.


(Thank you to Marianne over at PrimateProse for recommending Mary Roach!)
Posted by Unknown at 5:36 PM