I recently made a trip home, and decided to grab a book from the UW Bookstore to keep me company on my flight. I felt like it was time to read another piece of narrative non-fiction, so I picked up Blood Work by Holly Tucker. The book is about the first human experiments conducted on blood transfusion. I have no background of any kind in studying blood transfusion or in studying European and medical history in the time period of the 1660's. However, I was drawn to the book because I was intrigued by the way it was marketed on the jacket as, "a tale of medicine and murder in the scientific revolution." It seemed like something that would keep me awake on my nighttime flight. 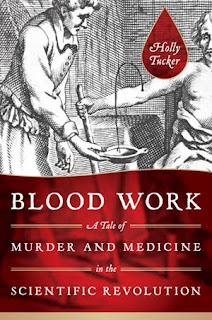 As it turned out, Blood Work was a perfect compliment to the material we are covering in my History of the Scientific Book and Journal class this semester. Of all the classes that I've ever taken, this is one of my favorites. It is in the special collections of the UW Library and we get to handle the real texts, but I digress. We were just looking at early copies of the Philosophical Transactions, the publication of London's Royal Society and the Memoirs of France's Academy of Sciences. These two publications, and their respective societies are an important part of Tucker's book. Publication is the means of spreading information, and getting into the journal of a national science organization was the premier means of getting attention for your work - critical for the early blood experiments.

Blood Work tells the story of Jean-Baptiste Denis one of the first medical doctors to experiment with animal to human blood transfusions. At the time, blood transfusion was extremely controversial because medical knowledge was conflicted about what exactly blood did in the body, what it was made of, and how it connected to the essence or soul of a person. There were fears that transfusing animal blood into humans would create horrible hybrid human animals. This resulted in two strong camps, those in favor of blood transfusion who believed it had the power to cure a variety of problems including mental illness, and those of the traditional way of thinking who wanted nothing to do with blood transfusions. Despite the controversy there were researchers engaging in these experiments anyway, and Denis was one of Paris' most famous (or infamous depending on how you see it.)

What I liked most about this book was that while well researched and factual about science and the time period, the narrative was extremely strong. This is a vivid story with great characters struggling not just to further medical research but also to make a name for themselves, with their reputations and all that goes along with them at stake. You will learn a lot of history, not just medically, but of the time period. You certainly won't be bored by details. The narrative is well crafted and engaging.

I loved seeing the work that went into researching this story. You can tell Tucker really did her homework to try to unravel the mystery of what happened to the patient in Denis' most famous animal to human blood transfusion. Without giving too much away, I'll say that the patient dies and it calls into question the safety of blood transfusions. The incident serves as proof for those medical doctors opposed to blood transfusion research to have the experiments, and thus Denis, shut down. However, there is a question about whether the transfusion killed the patient, or more sinister means were employed in a conspiracy to tank the research. The incident resulted in blood transfusion itself going on trial.

This book was enthralling. I was reading in a busy environment, and had to put it down several times out of the necessity of moving around and traveling. I was able to keep coming back to it though, because my interest was peaked enough to want to find out what happened in the end. This story has mystery, a conspiracy, and science. I was certainly hooked. This isn't really a fun read, not the kind of thing you'd want to take to the gym or the beach, but it is definitely interesting and worth the time if you'd like to learn something new about research in the 17th century, and be entertained while doing it.

One of the things that left me thinking after I'd put the book down was Tucker's epilogue where she compares the blood transfusion experiments with modern day stem cell research. Blood transfusion is now a standard medical procedure (though not interspecies, we've learned that human to human blood transfusions are the way to go because the body can reject the blood of another species). However, it was greatly feared when it was first proposed, and that fear set the research back years. I thought the corollary to how stem cell research has been perceived by certain groups was a strong one, and it certainly got me thinking about how research that might seem "extreme" these days may be viewed in the future. Overall, I'm glad I read it.
Posted by Unknown at 3:33 PM