On the day I attended the last college class of my higher education experience, I also attended a talk given by astrophysicist Neil deGrasse Tyson. For me, it was my commencement. I've made the decision not to walk at graduation for a number of reasons chief among them that none of my colleagues are walking and it didn't make sense to me to do it alone. So I won't be getting the cap, gown, prominent speaker send off typical for most people who complete a Master's degree. Still, the University of Wisconsin-Madison gave me a great parting gift. The opportunity to sit at my favorite place on campus surrounded by other students on a gorgeous day and listen to a person whom I have admired for years talk about the future is the best goodbye I could have asked for. 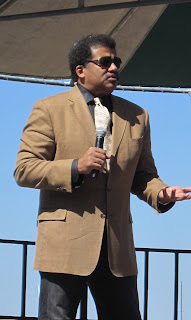 Neil deGrasse Tyson is an astrophysicist (please don't ask me to explain astrophysics further than saying it is physics in space) at the American Museum of Natural History but he is also an author, speaker, host, and even a meme. You might have seen him on the Colbert Report or the Daily Show throwing down some truth and clarity. He is eloquent, funny and honestly one of the people I admire most in the field of science communication. He pulls no punches, while still being extremely passionate about space and all the other STEM (science, technology, engineering, and mathematics) fields.

The talk, which took place 5/10/12 on the Terrace here at UW-Madison, started with Tyson talking about the role science plays (or lack thereof) in our culture. He used the example of money, by asking us which scientists appear on U.S. currency. The answer is none. You can make the argument that Benjamin Franklin was a scientist, but his experiments are not what is highlighted on the $100 bill. He is there for his political achievements. This is just an example of the way as a culture we have not placed a strong emphasis on science.

Tyson then went into talking about the history of the U.S. interest in space exploration. He said that historically there are three reasons why people invest a lot of money in a risky exploration: fear of death, promise of economic return, and praise for royalty and deities. If you look at the U.S. push to get to the moon we were acting under #1 fear of death. Our investment in NASA and the space program had everything to do with the Russians and the Cold War. When the communist threat was gone, the space program started to decline. I think Tyson really drove home this point when he said that if the Chinese decided to declare that they were building military bases on Mars the U.S. would get ourselves on Mars within 10 months. We could if we wanted to, we just don't invest in the necessary programs. We need to feel threatened before we actually do anything, how very American of us. 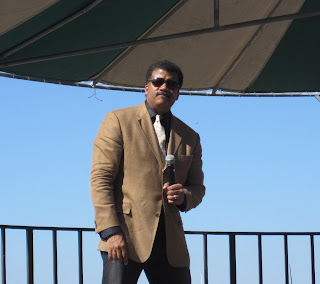 After going through the history of the space program, Tyson started talking about the economy and why investment in space and science overall can help. People in general seem to have this impression that NASA gets a big chunk of the federal budget, but Tyson pointed out that if NASA actually got what people think it gets NASA would be rolling in it. The perception of the budget is pretty skewed. What I love most about Tyson is that he says things that just make sense. When talking about innovation he said that the way you keep jobs in the U.S. is by making things that no one else can. Well, duh. But then where is the big push to invest in innovation? We aren't doing ourselves any favors by not trying to invent. Perhaps my favorite line from his talk (which was full of quotable one-liners) was "If the dinosaurs had had a space program, you can bet they would have used it" basically about how to save us from ourselves.

Seeing a speaker like Neil deGrasse Tyson meant a lot to me. He lived up to the hype. I was impressed with the caliber of his ideas in addition to his stage presence and the great dynamic he developed with the audience. All of us sitting there, the sea of students strewn on the concrete in front of the stage, get to walk away from this year at UW-Madison having heard from a man who is without a doubt one of the biggest bad asses in science communication. I mean he paused at one point to tweet his own talk (@neiltyson) that takes some cojones and an awesome sense of humor. It was a great experience, and I can't wait to read Tyson's new book!

Also you should watch this because well, it is astounding: