One of the biggest perks about attending Science Online in person this year was that all attendees received complimentary books. I got my first choice in the book lottery – Maria Konnikova’s Mastermind How to Think like Sherlock Holmes – and I thought it was great. However, if anything, reading up on how to think like the famous detective caused me to react in a way that is the complete opposite of Holmes, full of sentiment, attachment and personal bias. I failed miserably in this first test of Holmesian thinking.

The reason I say I failed is because I spent Konnikova’s entire book wanting to leap to the defense of Dr. Watson, Holmes’ companion throughout his many adventures. Holmes is admirable, entertaining, and his mental process is fascinating. Of course it is interesting to try to dissect the way that he looks at the world and deduces so much information from such seemingly obscure details. The fact that he uses his ability for good is particularly impressive, but Holmes is also kind of a jerk. Endearing, but still obnoxious. 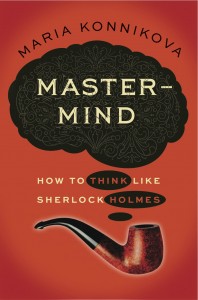 Holmes is arrogant and closed off. He keeps other people in the dark because it amuses him to see them struggle for the clarity he so quickly attains, all so he can have his dramatic unveiling at the end of every case. He takes extreme satisfaction in the dramatic unveiling of the solution to each puzzle. He lets the police take credit, yes, but not until he has fully satisfied his desire to see Lestrade or Gregson squirm. His disdain for the average person seeps through the stories. There is also that minor issue of the heroin addiction.

Watson doesn’t operate with the same mental dexterity as Holmes, but he is the character that I actually like. Holmes is the one I would hire to solve my next personal crisis, but Watson is the one I’d want to take out for a beer. It might be fun to imagine being Holmes, but I can actually relate to the human folly of Watson. He thinks like the rest of us do, and on top of that he’s a loyal friend and always bravely standing by at Holmes’ request with his pistol at the ready. He’s a soldier and a doctor – occupations I’ve always admired and respected.

Yet in spite of all of Watson’s good qualities, Konnikova throws him right under the proverbial bus. She makes no bones about her lack of admiration for the good doctor, even describing the “system Watson” way of thinking as: “Think of the Watson system as our naive selves, operating by the lazy thought habits” (Konnikova, 18.) I understand what Konnikova is getting at, Watson is the perfect example of the average person, but I bristled at the word lazy. Not because it isn’t correct – she fully backs up her reasoning with examples of Watson’s behavior in the various Holmes stories – but because I’ve attached myself to Watson the way you would a friend. How dare you call my friend lazy (even if he is!)

I found myself battling my sentimental attachment to Watson for most of Mastermind. One of the parts that riled me the most was Konnikova’s take on how Watson makes assumptions about Mary Morstan in The Sign of the Four. When I read the story, I thought Watson and Mary’s attachment to each other was romantic, especially the scene where the lights cut out and they instinctively reach for each other’s hand in the darkness even though they’ve only just met. Then Konnikova has to go and totally burst my bubble by dissecting Watson’s initial impressions of Mary, which I hadn’t realized were totally superficial (at best):


“Right away the good doctor has jumped from a color of hair and complexion and a style of dress to a far more reaching character judgment. Mary’s appearance suggests simplicity; perhaps so. But sweetness? Amiability? Spirituality? Refinement and sensitivity? Watson has no basis whatsoever for any of these judgments. Mary has yet to say a single word in his presence. All she has done is enter the room. But already a host of biases are at play, vying with one another to create a complete picture of this stranger” (Konnikova, 41.)

Well okay then, so much for romantic. It only gets worse. As Mastermind progresses Konnikova lays out an entire array of examples of Watson being confused, getting defeated, and settling for less than the most rigorous truth. In the shadow of Holmes, Watson is far from deserving of our praise, and certainly not one to be emulated. I see that the overall message of Mastermind is that all of us have an inner Holmes we can train, and if we work hard we too can possess those same mental abilities. Still, I walked away feeling a little slighted, much like the good doctor. I didn’t really want to see the character in that light. It is naive I suppose, but I could have done without Watson going under the microscope. Alas, once one's eyes are open, they are open.

If we take my sentimental attachment to Watson out of the equation, Konnikova’s book is an incredibly fun read that adds a wonderfully colorful context to Holmes’ thought process. I enjoyed it immensely and it really did open my eyes to the many ways we box in our own thinking. Recommended, although maybe not if like me, you find some solace in the sentimental way we react to our favorite characters.
Posted by Unknown at 4:49 PM