Devil in the White City

Yesterday I spend five hours writing my final paper for J669. It still needs some work but I'm very happy to have a first draft, at 12 pages (3,955 words) it is a relief that all I have left to do is edit it. The assignment was to read a literary journalism book and then write a report on it, critiquing its success. 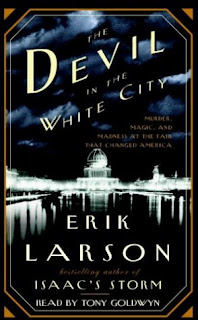 I chose to read Erik Larson's Devil in the White City. Although it came out in 2004, I actually hadn't heard of it until I moved out to Wisconsin. I guess because the book is set in Chicago and Madison has a close proximity to the Windy City it is more popular out here. Overall I really liked the book, but I did sort of question whether or not it should fit into the category of journalism.

The book brings together two stories, the architects designing the 1893 Chicago World's Fair and the serial killer H. H. Holmes who lured women away from the fair and killed them in his hotel just outside of Chicago. The stories do go together, but there is far more factual evidence for the actions of the architects and the events leading up to the fair, than there is a record of Holmes actions, because after all what kind of killer would leave evidence of his crimes to public record.

The reason that I'm not sure Devil in the White City should count as journalism is because Larson recreates some of the murders committed by Holmes in great detail, including what the victims were thinking at the time. There is no way Larson could have known what they were thinking, certainly not in a way that could be backed up by concrete evidence like letters or a journal. The recreation of scenes in this way is my biggest problem with the book.

Other than that, I enjoyed the book. I thought the amount of detail that Larson was able to dig up regarding the fair was pretty incredible. I loved learning the background to things that I hadn't known before, like that Walt Disney's father was a carpenter at the fair (which probably inspired Disney World,) or that the Ferris Wheel was developed to trump the Eiffel Tower.

I thought it was very compelling for a historical account, but then again adding a few gristly murders can go a long way to sucking in a reader (especially one like me who loves a good murder mystery.)

Fun fact: the book is going to be made into a movie staring Leonardo DiCaprio as Holmes, which I think has the potential to be a pretty good film (if it actually gets made that is.)
Posted by Unknown at 4:18 PM