Recently I departed on my first trip to Europe, to visit a friend who was studying abroad in Germany (Bonn, to be exact.) I traveled armed with several books lest I get bored on my flights or train trips, and one of these books was Donovan Hohn's Moby-Duck. I really, really want to be able to tell everyone I know to go read this book, but I can't. It was hard to get through, I kept stopping and starting and coming back to it, reading in short bursts which I don't usually do because I could only focus on it for small intervals. I feel like someone who isn't really invested in the subject matter would be likely to put it down and not go back to it. But even though I don't think it is for everyone doesn't mean I didn't enjoy it. Actually, I liked it a lot. 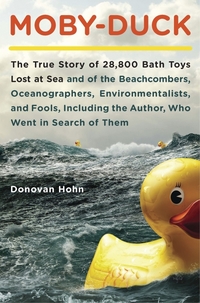 Moby-Duck starts with the seed of a great story, one so great it has been misinterpreted and told erroneous many times over the last decade. In 1992, a shipping container fell off the back of its transport ship in the Pacific Ocean. The container was holding small plastic bath toys, sets containing a beaver, a frog, a turtle and a duck. These bath toys, set afloat in the ocean traveled the high seas, and ended up washing ashore in high numbers on the Alaskan coast. Hohn is really captivated by the idea of the bath toys, particularly the rubber duck, lost at sea and ends up quitting his job as a teacher to chase the story and find out how far the ocean could have carried the toys. There were rumors that they had washing up in Maine, which would have meant traversing the arctic. It's a good little story, if you don't mind the fact that the ducks didn't actually end up in Maine and Hohn spends the majority of the book chasing a figment of a duck. I really didn't because this book is about much more than bathtub toys.

If you can see past Hohn's sometimes difficult to relate to fascination with the rubber duck, you will start to notice though that this isn't actually a book about rubber ducks. Sure, the science is there. It includes plenty of facts about pollution, plastics, and ocean currents. But really this is a book about fatherhood. Only speaking from my point of view as a 20-something woman who has no children, it feels like the book, the whole fascination with the ducks is Hohn having a hard time with becoming a father. That's not to say he doesn't want to be a father, the relationship with his son that he describes in the book is very sweet, but ultimately I think what the duck represents is childhood - Hohn having to let go of his and focus on making his son's the best it can be.

One of the most likeable parts of the book is Hohn himself. While his self-deprecating descriptions of his participation in his various sea-faring adventures can get a little tedious (we get it, you are not particularly adept at this) at the same time you can't help but feel a little jealous. Jealous that while you sit at your day job doing all the things you are supposed to, this guy had the balls to quit his job and travel through Asia, Hawaii, Alaska and the Arctic because he was just interested in something. Would you want to do that? I would. I respect Hohn for going in search of his own adventure, for chasing his own personal white whale, and for having the guts to do something unexpected.

The book is also beautifully written. Hohn writes like an English teacher, but in this case it works. His romanticizing of the ducks and the sea works in this book whereas in a different story I think it would drive me a little nuts. The descriptions of what he sees and experiences are pitch perfect for me. For example:


"One imagines, before setting sail, that seafaring promises excitement or romance but on calm tropical seas, the hours pass through one's mind like cubic meters of water through a manta trawl, leaving a sprinkling of impressions snared in memory's gauze." (pg. 168)

Overall, Moby-Duck is a good book, it is well written, it has a great cast of characters, and there are a lot of interesting facts in it. Looking at it as a story about rubber ducks, will leave you disappointed. You have to see it for what it is, Hohn's own adventure tale as he comes to terms with his life at home. I wouldn't recommend it for everyone, but I enjoyed it and would certainly recommend it to people with an interest in the ocean, in pollution, or in personal narratives. I would recommend this book for people who normally read narrative non-fiction. There was a lot of good in it, even if it did take me a while to get through.
Posted by Unknown at 4:03 PM