I've mentioned before that I'm taking a class this semester on social media for the life sciences. This class has been a crash course in the internet. Before taking this class, I considered myself relatively savvy about the internet. I've been blogging for a year and a half, on Twitter for a year, I've written a dozen E-Newsletters for my day job, hell I've even been to 4Chan and back. Still, however much I knew about the internet I was grossly uninformed about how to engage with people online. Reading Scott Stratten's book UnMarketing for this class has me convinced that the most valuable thing you can get out of the internet is engagement. If you checked out my book review of Charles Duhigg's The Power of Habit, I talked about having my mind blown by something painfully obvious. UnMarketing took that sensation to a new level. 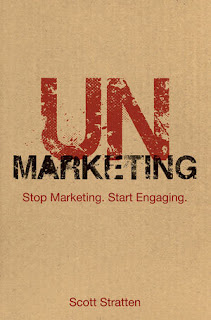 The idea of UnMarketing is that traditional methods of marketing don't even come close to the kind of success you can have if you just start listening to and interacting with people. Simple enough, right? Well then why aren't I doing it? I'm a science writer, looking for a steady job. I've tried, and failed, to freelance my work in the past. I'm firmly convinced that my freelance failure had everything to do with marketing myself in traditional ways. UnMarketing is about making connections with real people. You make those connections based on mutual interests, you build a relationship around it, and later down the road you'll be in a position to help that person or they'll be in a position to help you. People will be way more likely to give you a chance if they trust you and they like you.

That lecture about how to freelance? All those tips about getting to know the publication, introducing yourself sincerely, writing a persuasive pitch letter... didn't amount to a hill of beans for me. I didn't sell anything, I ended up posting the articles I was trying to sell here instead. What all the people who tried to help me find freelance success were trying to tell me was to UnMarket myself, and it went right over my head. I thought I got it, but clearly from my results I did not.

You want to get yourself published on a specific website? Find out who runs that website's Twitter account, follow the official account, follow the editors, follow the writers. Throw some link love in the direction of those people. Comment on things they say. Use them as a case study for a blog post. If you mention them, and tell them you mentioned them, odds are high that they'll start trying to figure out who you are and what you're saying. They'll look at your blog and website, and if you have solid content to back yourself up, they'll probably follow you in return. Build a relationship where you can start asking them questions. They'll get to know you and how you operate. Then, when you have an article to pitch instead of your email getting immediately deleted they'll recognize your name and at least give you some consideration.

Well, duh. I feel like dozens of people have been trying to explain all that to me for the last two years, but it took Scott Stratten's book to shift those puzzle pieces in my brain into alignment. This is a business book, the majority of the examples have to do with corporations and sales, but I still think every writer should read UnMarketing. Writers are selling their brain and what they can do with it, and I firmly believe it is a lot harder to sell an intangible product. (I suppose my brain is tangible, technically, but I'm not going to let you poke around in it to figure out if you want to invest your time, reputation, money, etc.) UnMarketing was so worthwhile as a writer because so much of the content applied to what I am trying to do as I establish myself online.

The science writing community is tremendously strong online. If you want to get into this industry, you need to be on Twitter and you need a website or a blog because that is where the people you need to convince to give you a chance are, that is where the people you are going to learn from are, and that is where the people who are going to read what you write are. UnMarketing is the best guide that I've read for how to get yourself into that community and show people what you're made of without falling flat on your face. It takes a really honest look at things like transparency and the term best seller, dealing with trolls and even how annoying captchas are. Stratten just calls bullshit on so many things that I've seen online but wasn't sure how to handle. I really wish I read this book years ago (it only came out in 2010) but better late than never.

If none of that convinced you that science writers need to UnMarket, let me just say that the book is also wonderfully written. By that I mean that Stratten has a very clear and distinct voice. You will walk away from reading feeling like you just had a conversation with the guy. I will also say that my favorite part of the entire book was the footnotes. When I write my Pulitzer Prize winning masterpiece (you know, someday...) I'm going to have footnotes like that. I read every single footnote because the funny commentary contained in them was awesome and unexpected. I enjoyed reading this book, and I found a tremendous amount of valuable information in it - that's just a win all around.
Posted by Unknown at 10:17 AM