I'm about two decades late to the party with this book review, but considering I was two years old when Jurassic Park was first published my interest in dinosaurs, genetics, etc. needed a little more time to develop. I have finally read Michael Crichton's iconic Jurassic Park, and not really surprising anyone I loved it. I have been exposed to the cultural premise of Jurassic Park my whole life, but I'd never read the book or seen the movie, so really it was like my first exposure to the story in its entirety. I found my Dad's old copy from back when it was first released and decided to rescue it from the book donation bin. I'm glad I did. 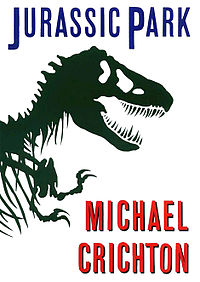 In case you live under a rock and are thus unaware the premise of Jurassic Park is that scientists develop a way to pull dinosaur blood samples out of mosquitoes fossilized in amber. The blood is used to decode the genetic sequence for a variety of dinosaurs and they are then grown and hatched in a lab. An eccentric billionaire funds the project because he believes he can make billions by using the dinosaurs as the main attraction in a theme park. What could go wrong genetically recreating dinosaurs for a modern day tourist attraction? Everyone involved in the project thinks nothing could go wrong, yet things do go awry on the island where the theme park is built causing much dinosaur related havoc.

I can only speculate what reading the book when it was first published must have been like and how I would have perceived the ideas and lessons in the context of early 90's technology. Still, even in our current age of high speed genome sequencing I think the warnings in Jurassic Park continue to hold true. Things go wrong because the people working on the dinosaur project don't give nature enough credit. They think there can't possibly be a way for their fail-safe measures (creating only female dinosaurs and making them lysine dependent) to be overcome by the dinosaurs. They doubt the intelligence of the life forms they create and their ability to adapt. They also don't appreciate that they have created something new instead of just recreating the past.

The desire to profit off the dinosaurs is the main priority, leading to a lack of understanding about them and the process that created them. Living in an age of even more advanced scientific ability, I think remembering that there can always be unexpected outcomes with any scientific experiment is important.   I am a firm supporter of genomic research, but the key word there is research. Creating a profitable enterprise like the one in Jurassic Park shifts the priority from understanding to economics. Understanding should always be the goal with scientific inquiry and processes, because if we are going to use technology to manipulate, change, or create we need a firm grasp on the what and the how.

Ultimately I think what I took away from Jurassic Park was a sense of respect for science and nature. We can't take ability for granted. Ethics are important. Why we do things matters as much if not more so than just our base ability to do them. While I know (obviously) that Jurassic Park is a work of fiction, I think it gives a reader a lot to think about regarding research and real-world applications, even after so many years. It is also pretty entertaining, the plot is great but the characters are also well developed and it is definitely action packed. I now need to find the time to watch the movie, and read The Lost World. I'm totally hooked. Have you actually read Jurassic Park? Just seen the movie? How old were you? What did you think? I'd love to know what other people thought when they first encountered the story.
Posted by Unknown at 2:58 PM