Poison That Packs A Punch

My holiday break is starting to wind down (as evidenced by the Christmas tree that has made its way out to the front lawn to await collection) but thing are just as busy as ever. I spent a large chunk of today applying to internships for the summer, and pitching one of my articles from last semester. We'll see if I get responses, but for now I feel productive having at least sent out so many emails.

After such a productive morning I treated myself to an afternoon of reading and was able to finish my advisor Deb Blum's latest book Poisoner's Handbook. I said back in the fall that I wanted to read her book, and I was lucky enough to win a signed copy at the end of the semester event for UW's online literary magazine Corkboard (which features the work of some very talented student writers, so you should check it out.) 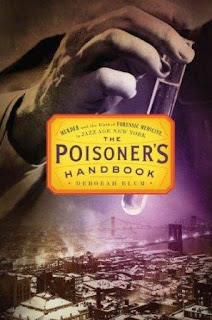 Poisoner's Handbook tells the story of New York City's first chief medical examiner, Charles Norris and famous toxicologist Alexander Gettler. The book is a work of literary journalism that chronicles the rise of toxicology and forensic medicine in the 1920's and 1930's covering prohibition and the great depression. I thought the book was well written, and I'm not just saying that because Blum has say over my grades. She does a great job of making chemistry approachable, and I hate chemistry so that is actually a big compliment.
The book is organized with each chapter representing a different poision, with some paragraphs on Norris, Gettler, and the science of toxicology and some paragraphs describing a murder case showing the effects of each chapter's poison. If anything I would say that because some of the people described in some of the murder cases reappear in other chapters, it can be hard to remember who is who. But even so, that did't dampen my enjoyment of the book. The structure was easy to follow, and even in moments where I had to think back to remember a character I was never really lost.

Knowing Deb Blum personally there were points where I could actually hear her in my head reading aloud the words on each page. In our literary journalism class she would read us experts from each of the authors we studied so I've gotten used to the cadence of her speech. I found it pretty interesting that I could see the same rhythm in her writing, and it made me wonder if I write the way I talk.

Poisoner's Handbook is the fifth book I've read since coming home, and hopefully I'll be able to finish one more before heading back next week. I am running out of space on my bookshelves at home, but I still love seeing my little library. It makes me feel oddly accomplished.
Posted by Unknown at 8:40 PM