As this is a personal blog, I have no qualms about shamelessly promoting people (and writers) that I like, as long as I give full disclosure as to how I know them and why I want to promote them. One of those people that I am going to promote now is Charlie Butler - he was a professor of mine from Lehigh and was tremendously supportive of my quest to get into grad school. He is an editor at the magazine Runner's World, and has just released his first book, which I remember him working on when I was his student. 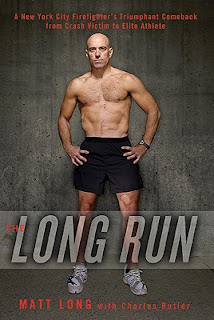 The Long Run: A New York City Firefighter's Triumphant Comeback from Crash Victim to Elite Athlete is about Matt Long, a firefighter who was in prime shape in 2005 when he was riding his bike to work because of the NYC transit strike, and was hit by a bus making an illegal turn. He was impaled by his bike, and dragged by the bus. His doctors thought he'd never walk without a cane again, but he surprised everyone by dedicating himself to recovery and coming back to run the NYC marathon in 2008. It is a classic comeback story of triumph against the odds.

When I was in his class at Lehigh two years ago, Charlie would occasionally talk about the story, and what it was like to interview someone who had been through so much. He was drawn to the story for Runner's World because of how amazing it was that Long was able to run the NYC marathon after the injuries he sustained. As he was reporting, Charlie developed a relationship with Long and his friends and family and was able to get a great picture of what it was like to work through that kind of recovery.

I have not had a chance to read the book yet, it is going on my list of things to read once the semester is over, but I have read magazine pieces by Charlie and I can attest to the fact that he is a great writer, so I encourage everyone to check out his book, and of course let me know what you think if you do!
Posted by Unknown at 2:33 PM