Today in J620 we watched the documentary Seeing Is Believing: Handicams, Human Rights, and the News by Directors Kateria Cizek and Peter Wintonick. The film is a little old, and because it is about technology it is thus a little outdated, but some of the general principles are still pretty interesting. 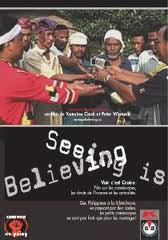 Video has tremendous power in terms of reporting human rights issues, both for good and for ill. In the film journalist Joey Lozano follows the Nakamata, a group in the Philippines that are given a video camera by the human rights group Witness, to help document their struggle to reclaim their ancestral lands from sugar cane producers. Lozano serves as a go between for the native people and the media, teaching them how to use their camera and helping them take their footage to the mainstream media in the Philippines to get attention for their cause.

This would be the good side of the power of video, it helped the Nakamata document violence that was being perpetrated against them, and helped to ward off violence once it was well known that they had a camera available. On the flip side, the film also showed that violent extremist groups also have access to video and use it to recruit new members and spread their own messages. The film specifically showed videos made by the Taliban and Neo-Nazi groups.

It was an interesting film, but at the same time I don't think its exactly a revolutionary idea that video is a powerful communication medium. Since the film was made, I think that film has just increased in power for the good and the bad groups around the world. In doing my own research on the film, I also learned that Lozano died in 2005 of cancer. Its sad in its own right, but in the context that a disease took down a man that survived an assassination attempt, I find his story particularly moving.
Posted by Unknown at 5:43 PM