Fear and Loathing in Wisconsin 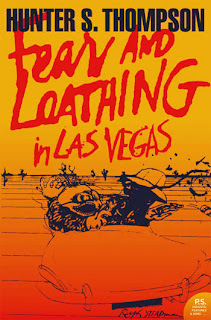 I didn't love it, but I didn't hate it either. It was really hard to look at it as a piece of journalism, although I can actually see pretty clearly how the piece is almost like a stream of conscience list of what happened during Thompson's drug binge in Vegas. I like that he uses a fake name, and that name (Raoul Duke) becomes like a fictional character. I think what made it so hard to take seriously when it was written is that he describes all of his acid trips and subsequent illusions with complete and total seriousness, not really acknowledging that they are just fantasies created by LSD. He also chronicles his paranoia with complete and total certainty, which also gives the piece more of a fiction feel.

Overall I think that Fear and Loathing in Las Vegas falls into the realm of journalism because it is a very accurate record of Thompson's memory of his trip to Vegas. I think its true to his memories, and what isn't in his memory is apparently on a tape recorder. I think it is what happened during the trip, I just think it rattled cages because it shows such an extreme case of drug use. Its also notable for the fact that he didn't write either one of the articles he was assigned, the desert race or the drug enforcement meeting.

For anyone who wants to learn more about Hunter S. Thompson I whole heartedly recommend Oscar-Winner Alex Gibney's documentary film Gonzo: The Life and Work of Dr. Hunter S. Thompson, and not just because the director is from my hometown. The film tells the story of Thompson's life from birth, through the peak of his career, to his suicide in 2005. Gibney gets an insider view of Thompson's funeral, rocket and all. It also has Johnny Depp, which pretty much makes it a win.
Posted by Unknown at 9:44 AM