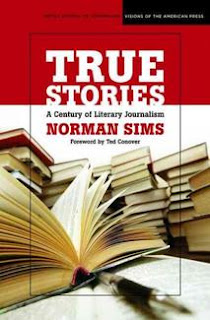 In addition to Sims' take on the history of the literary journalism style, the book also includes: The Long Fall of One-Eleven Heavy by Michael Paterniti, Red Caucasus by John Dos Passos, The Jumping-Off Place by Edmund Wilson, The Old House at Home by Joseph Mitchell, and Family Journeys by Adrian Nicole LeBlanc.

Overall I liked True Stories, it gave me a lot of important background into literary journalism and how writers need to immerse themselves in a topic and strike out on their own a bit in order to get a story that hasn't been told time and time again. Sims made me want to devour more examples of literary journalism, particularly Truman Capote's In Cold Blood. I might have to add that one to my to-do list.

Of the samples of literary journalism included in the book, I found Paterniti's The Long Fall of One-Eleven Heavy to be incredibly powerful. It was emotional for me reading about a plane crash so close to the anniversary of September 11. But despite that, I thought the way Paterniti told the story without naming names added a lot of drama to the way he told the story. It was gripping, and the pages flew by. Unlike Dos Passos' Red Caucasus which I actually had trouble focusing on and staying involved in the story.

One useful thing (I think at least) that Sims did was to include a historical list of literary journalism pieces. If you had the time, you could go through the pieces and trace the history of literary journalism through the words themselves. Although sadly I know that I, and very few people I know, would actually have the time for so much reading for the sake of curiosity. It is still useful to have the list, so you could go back and pick out select pieces to follow up on.
Posted by Unknown at 1:24 PM